Documentary Photographer James MacKay is the Edge of Humanity Magazine contributor of this social documentary photography.  From his project ‘The Prison Without Bars’.  To see James’ body of work click on any image.

Tun Lin Kyaw was brutally tortured by Burma’s infamous military intelligence when he was arrested. He received no medical treatment whilst in jail and nearly died from infection. Every day he has to dress his wound in a rudimentary fashion as healthcare is extremely limited in the camp.

Tun Lin Kyaw is a former political prisoner from Burma now living in exile in Umpiem Mai refugee camp on the Thai-Burma border. The former bodyguard of Aung San Suu Kyi was arrested in 2004 for performing a solo protest in Rangoon, demanding the release of all political prisoners. He was jailed in Insein prison for 3 years.

Burma’s non violent revolution has seen thousands detained for their political activities and beliefs. There are currently more than 2,000 political prisoners in Burma but over 10,000 have been detained throughout the years in a country where any form of dissent to the military regime’s rule will result in arbitrary arrest and torture. The cycle of oppression against political prisoners does not end in prison where conditions are inhumane. Once released their lives are shattered as they are forcibly outcast from society by the authorities who intimidate, harass and often re-arrest them at any given moment. Their lives are taken from them as even families and friends live in fear of association with them. Left with no choice or chance of life many flee the country often with just the clothes on their back arriving at the Thai-Burma border where they face the challenge to rebuild their lives and continue their fight for democracy whilst trying to survive as illegal and unwanted refugees. 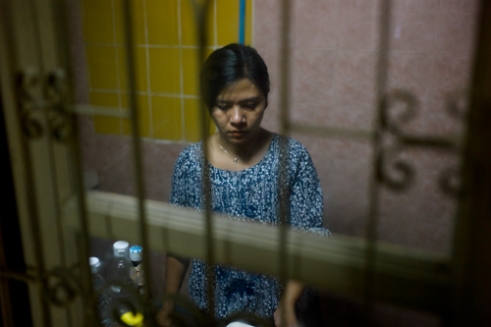 Khin Cho Myint, also known as Zulu, was arrested in 1998 for her role in student demonstrations and was sentenced to ten years in prison. She fled Burma in 2008 after her involvement in the Saffron Revolution when the authorities came looking for her once again. 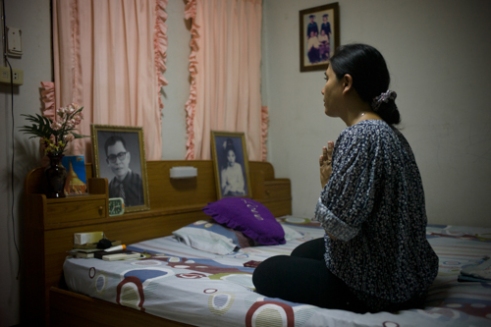 Photographs of her parents were recently smuggled out of Burma for her. Most former political prisoners flee the country with nothing more than the clothes on their back and some money. They cannot risk carrying any documentation with them in case they are caught whilst trying to leave the country.

Life on the Thai-Burma border is dangerous for former political prisoners who are not officially recognized by the UNHCR as refugees. Before 2007 many were able to gain resettlement to third countries, but over 100 remain in limbo in refugee camps or safe houses faced with the constant threat of deportation back to Burma by the Thai authorities at any moment. In this ongoing long term project, from the refugee camps that are scattered along the border with Burma to the safe houses of Mae Sot to those who have been resettled to third countries on the other side of the world, the daily lives of Burma’s former political prisoners are documented as they continue their fight in the struggle to bring democracy to Burma as well as their own personal fight for freedom. 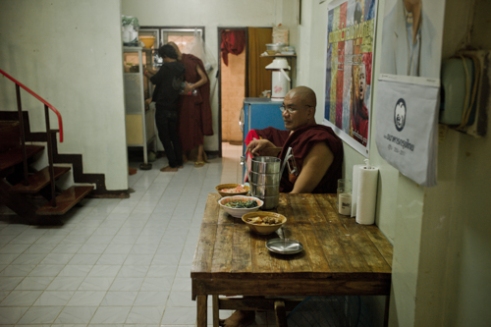 A monk for most of his life, U Zawana was arrested in 1993 for meeting the UN official Mr Yozo Yokota. He was sentenced to 29 years in prison and served more than 16 years before fleeing to the Thai-Burma border in 2009 shortly after his release.

Burmese monks are not allowed to live in monasteries in Thailand, however U Zawana continues his monk life and Buddhist practice each day in the safe house that he now lives in on the Thai-Burma border.

Thin Min Soe, a former labor activist from Rangoon was arrested in 2006 for delivering documents to the National League for Democracy. At the age of just 22 she was sentenced to 11 years in prison. Her husband Soe Myint was also jailed for his political activities. Like most Burmese, Buddhism plays an important role in daily life. They make offerings every morning from the meager food rations that they receive in Umpiem Mai refugee camp where they currently live in exile. 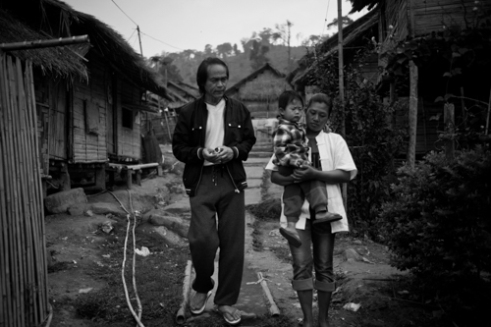 Khun Saing, a former medical student was jailed on three separate occasions for his political activities spending more than 13 years in prison. He eventually fled Burma after his release in 2004 and met and married his wife Aye Aye Moe (also a former political prisoner) whilst living in Umpiem Mai refugee camp on the Thai-Burma border. Whilst Khun Saing was resettled to the UK, his wife and young child remained in the camp, unrecognized as refugees and unable to be resettled with him. Now five years later the family have finally been re-united as Aye Aye Moe has been granted asylum in the UK 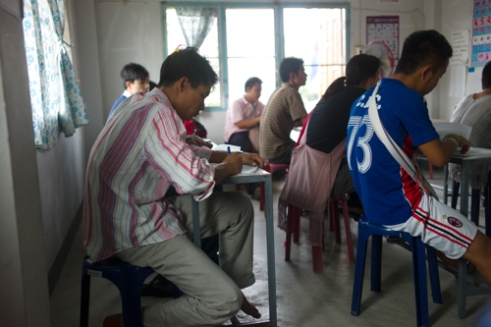 Soe Lwin was arrested aged just 14 for distributing pro-democracy pamphlets in Rangoon, Burma in 1994. He was sentenced to 24 years in prison and was jailed for 15 years and eight months in three different prisons until he was released on 18th September 2009. He fled Burma and now lives a precarious life in exile as an unregistered refugee in Mae Sot on the Thai-Burma border.

Back to HOME PAGE